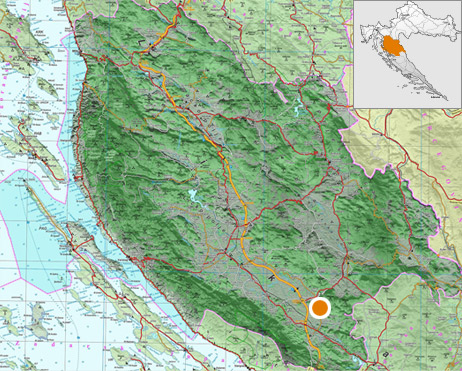 The municipality of Lovinac is situated in the south of Lika, on the edge of the Lika basin that is naturally connected to the fields of Gračac, in the Gospić – Udbina – Gračac triangle. A singular geographical boundary in the sub-Mediterranean area from the south, southeast and west is amrked by the Velebit massif. Remains of Japodic hillforts such as Rukavinska, Vrkljanske, Cvituša and Razvala; remains and the reconstructed Roman road under Cvituša and the remains of the Medieval hillfort in the region of Lovinac such as Novak grad with Štulića tower, Vranik, Budak, Zagon, Lukavac and Lovinac are witnesses of the century-long settling of the Lovinac region.

Today the municipality of Lovinac is best known for its preserved and protected natural values: attractive natural lndscape, thick and intact woods, numerous karst phenomena, clean rivers and streams. The area of the municipality of Lovinac covers the highest peaks of Paklenica National Park such as the special reserve „Sveto brdo“  (Holy Mountain) and a large part of Velebit Nature Park.

On the border of Dalmatia and Lika, with the support of the European Union, the biggest skiing center in Croatia is to be built, a center for mountain tourism – Sveto brdo on the Velebit that will connect Lika and Dalmatia in tourism and economy. The 11-km-long route for the gondola will lead from Sveti Rok to Modrići and Rovanjska.

Motorway A1, exit in the municipality of Lovinac in Sveti Rok and the Gornja Ploča junction. 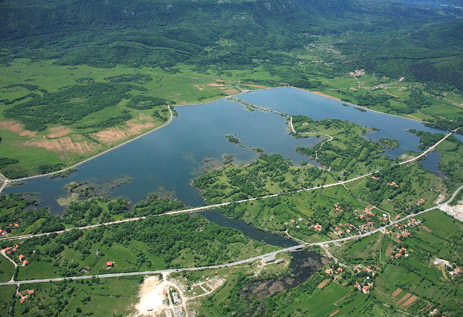 The easiest way to tour the Lovinac area is by bicycle, and they can be rented in the PZ Lovinac Agricultural Association building. The entire region is connected with four cycling trails: Ličko Polje Trail, Ričica Valley, Velebit Trail and Suvajski bunari Trail –  Japode Trail. The highest ponits in the municipality are the Velebit peaks: Sveto brdo (1753 m above sea level) and Babin vrh (1744 above sea level)
Natural (karst) and artificial lakes, such as the  Ričica accumulation –Štikada Lake and Opsenice  River–Sveti Rok Lake

– cycling, sleighing and skiing in the winter (sleighs can be let out in restaurant Braja)
– summer bathing in Sveti Rok Lake and the rivers
– hiking, free climbing and caving
– hunting and fishing are very popular in the entire Lovinac region

– Day of the municipality of  Lovinac on August 4th  when a competition in the traditional Lika games is organized: pulling ropes, throwing stones,  throwing horseshoes, climbing  the hay stack and other.
– The feast of St Rocco on August 16 is the biggest and best known religious celebration  in Lika that has been traditionally celebrated since 1790.
– The feast of St. Michael on September 29 is traditionally the biggest feast  in Lovinac.